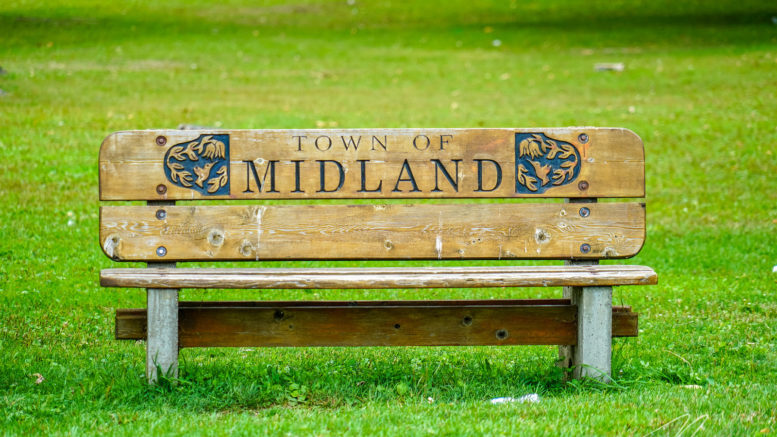 June was once again a busy month for Midland Council as it continues to tackle several structural issues and make key decisions.

We’ll begin the update with a brief review of June’s deputations.

Don Chapman spoke representing the Midland Terry Fox Run and discussed plans for this year’s event. He noted that while participant numbers are declining – a concern they are trying to address – Midland is Ontario’s 17th largest financial contributor to this event. Well done to Don and his team – a real good news story!

Next was a presentation by MPAC which described the process for determining property values for the 2016 update. It was revealed that the median single family dwelling has increased $21,000 since 2012 to a value of $211,000 in 2016. While going in the right direction, this is still modest appreciation considering what’s happening elsewhere in Simcoe County and other nearby markets.

Last was a presentation from Simcoe County CAO Mark Aitken, with a cameo introduction by Warden Gerry Marshall. Mr. Aitken reviewed the various services the County provides both directly and on behalf of the Province – quite impressive considering the sheer geographical size of Simcoe County. Incidentally, 19% of Midland’s tax dollar goes to County to pay for its direct services.

Now for the nuts and bolts of Council’s June meeting. Where do we begin – MPUC, leases, MCC, Source Water Protection, SSEA, Ombudsman reports, changes to the strategic plan and the need for budget targets. The list seems long but many of the items are recurring ones that Council needs to grapple with once and for all.

Three words come to mind – net, net, net! Council continues to need some clear-eyed decision-making around all the Town-owned properties being occupied by other entities. This part should be obvious since the Town does not exist to provide subsidized accommodations for other organizations. Discussions about grants, partnerships or other financial supports should be a completely separate conversation.

On June 21st, Council decided to proceed with the sale of the Midland Power Utility Corporation (MPUC). The decision was made after numerous meetings and discussion spanning many years and in recognition that the Ontario government very strongly encourages sales or mergers to rationalize local power distribution across the province.

On June 21st at a meeting not televised Council officially received a Report from the Ombudsman following an investigation that found Midland Council in violation of the open meetings provisions of the Municipal Act. One of the Ombudsman’s findings was “Council for the Town of Midland violated the… (Municipal) Act and its procedure by-law by failing to state the general nature of the matter to be considered in the resolutions to go in camera on both September 14 and October 13, 2015.”

Just six days after receiving this report, Council again failed to state the nature of a matter to be considered before going in camera. The ability to stay ‘off the record’ is a real responsibility that Council must take seriously. We suggest they make an effort to better familiarize themselves with the proper use of in camera deliberations and undertake a real effort to adhere to the Municipal Act as it relates to closed door meetings.

The Midland Cultural Centre, once promoted as a model of self-sufficiency, made a deputation to Council earlier this year requesting that Midland taxpayers pay $10K- $20K a year to cover the MCC’s insurance costs. Council’s view at the time was that if the acting CAO could find the money in current department budgets, the request would be granted. In June Council was presented with a motion approving the $20K expenditure even though staff acknowledged the money had not yet been found. Council wisely deferred voting on the motion until funding is clear.

Property owners should have recently received the final 2016 tax bill along with a green insert that highlights Town spending by department and also shows amounts collected for Education and County. A full 57% of your tax bill is paid to Midland for local services the Town provides. This is the only part of your total bill our elected Town Council manages and controls.

We’ve included a chart of local tax comparisons below. It illustrates how Midland is at a decided disadvantage for business and residential growth due to high local spending and the local tax rate that results. While Owen Sound has the highest local tax rate among 27 municipalities in Simcoe and Grey Counties, Midland is a close second. Any way you cut it, being near the top or the bottom for tax levels is not a key to success. 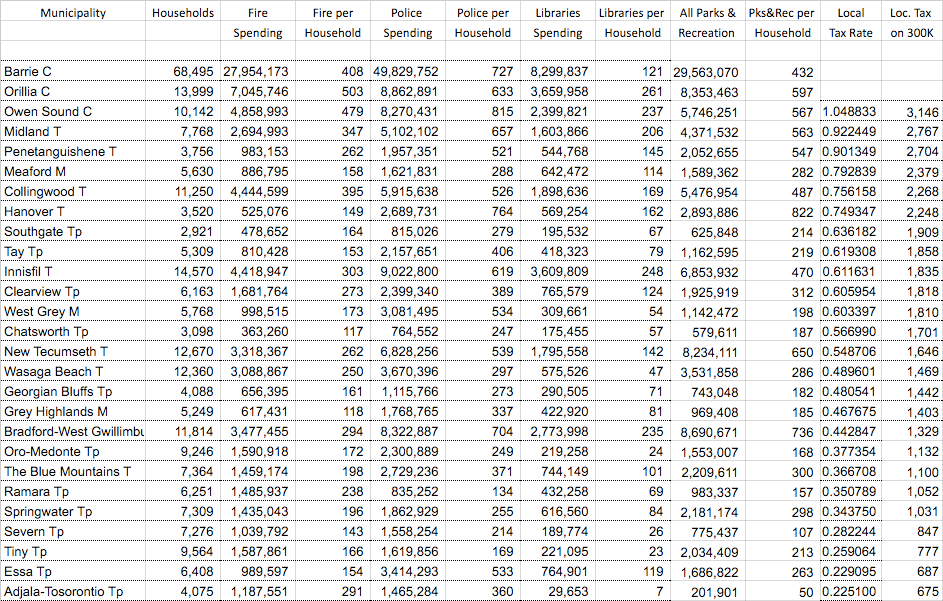 Among other data presented, we have taken a $300,000 home and applied the local tax rate to compare the taxes local municipalities control through their own spending decisions. We have used $300,000 because local realtors and builders have advised that this is the approximate cost of a 1500 sq. ft. new home on a 50’ lot but the relative positions are the same at any price higher or lower.

Further comparisons could be done on unemployment rates, median household incomes etc. to add data about ‘ability to pay’ but we think everybody recognizes Midland is not a wealthy community overall. The facts speak for themselves. And clearly the elephant in the room for both Midland and Owen Sound is spending for emergency services.

Now that Council has formally removed the 75th percentile target from Midland’s strategic plan, it needs to substitute the achievable goal of removing $1.5 Million from base operating costs to allow these funds to be allocated to things such as fuelling economic growth and providing new value-added programs.

While Council has done a better job controlling spending over the last 5-6 years, we believe some imprudent decisions made in the first decade of the new millennium still need to be unwound. Hopefully Council will now deal with the $1.5 Million motion it previously deferred. That way there will be a real target when the 2017 budget cycle gets underway this September.

Council has finally liberalized the Zoning By-Law so that it reflects today’s realities. Bravo Council and staff!

Be the first to comment on "Taxes, Budget, Town Leases & More"