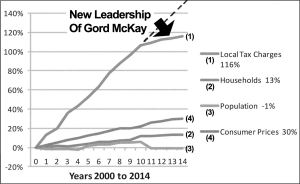 After 10 years of unsustainable spending growth, Mayor McKay, councillors File, Canning and Ross have begun the journey to control runaway town spending and reverse the direction set by previous leaders.  Now you have the opportunity to build on this momentum by choosing progressive leaders on October 27th.

As election night draws near, the voters of Midland face some big decisions that will impact the prosperity and vibrancy of our community for years to come.

In the 10 years from 2000 to 2010, local taxes increased by more than 100% while inflation increased only 25%. These increases in local taxes put Midland into the unenviable position of being the highest taxed community with the least growth in Simcoe County.

Between 2010 and 2014, a new majority on Midland’s Town Council, including Pat File, Mike Ross, Glen Canning and Mayor Gord McKay, were able to put a lid on spending growth, challenging Town departments to reduce costs and present budgets containing 2%, 0% and -2% growth, ultimately keeping it below the rate of inflation at just 7.5% increase over 4 years, all while preserving service levels.

These progressive members of Council also undertook the significant challenge of having KPMG do an outside analysis of the Town of Midland’s operations, identifying millions of dollars in further savings that could be obtained without impacting the quality of service offered to residents.  They spearheaded the hiring of promising new talent at the Town, the creation of a new economic development office funded with $400,000 from the County, securing the Unimin property for the people of Midland, and developing stronger relationships with neighbouring municipalities.

During this same term, a minority of  council members, including Zena Pendlebury, Jack Charlebois, Bob Jeffery and Jim Attwood argued and acted against the progressive group and in favour of higher increases in Town spending.

These Councillors were also aligned with the out-of-control spending increases brought in under former mayors James Downer and George MacDonald, and former deputy mayor Ruth Hackney.

These candidates may be nice people to talk to, but are also a little too ‘nice’ with other peoples’ money, lacking the discipline needed to control spending and lead an 18 million dollar corporation.

As for Stephan Kramp, the Deputy Mayor who has now chosen to run for Mayor; in our view, Mayor Gord McKay has consistently shown far better leadership, wisdom and respect for staff and Council than Stephan Kramp. Gord McKay is simply the superior candidate for Mayor who will best represent Midlanders‘ interests locally and at the County level.

Fortunately, the more progressive Councillors led by Mayor McKay have proven that they can spend taxpayers’ money responsibly and put Midland first.

With a supportive, cohesive Council instead of a minority group seeking to undermine progress, just imagine what they could do for Midland.  There are a number of fresh faces in the race for Council who embrace positive change and can round out a team of experienced Councillors. This group includes four candidates:

They all bring new ideas. Many have business and entrepreneurial backgrounds with real world experience serving customers and managing limited resources.  They understand the value technology adds in communication and economic development. They have open minds and the ability to be fair and balanced for the benefit of all residents.

MidlandCommunity.ca is supporting a Council that will guide Midland to a better place – affordable taxes, quality services, transparency and a brighter, more prosperous future for all.

Early reports are in that advance voting is up almost 100% over 2010. Community engagement is the first step to helping our future arrive ahead of schedule. Congratulations, Midland!

Through its actions, Midland Community.ca strives to promote fair taxes, efficient municipal services, transparency, sustainable growth and economic development.  To that end, we’ve analyzed the positions of the candidates and their track records to determine if their policies are also in support of those goals.  We take the time to attend virtually all public meetings of Council and committees, to speak to Councillors about the issues, and to collect and analyze reams of data on current and past spending decisions.  Most people don’t have the time to follow or analyze all of this information.  Our task during this election is to highlight which politicians are on which side of the fence, so Midland voters can make an informed decision that cuts through the election posturing.

4 Comments on "What’s Right With This Picture?"