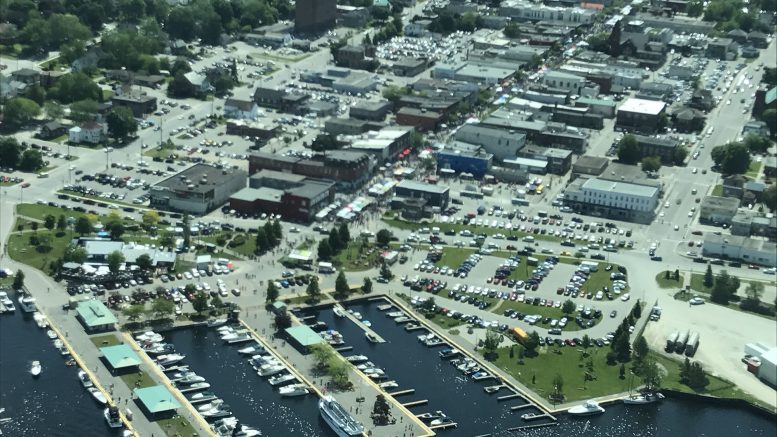 Once again, June like May has become an ambitious month for Midland council. With this in mind, we’ve decided to provide our readers with a mid-month update.

Our most notable topics to report include, the public hearing concerning the sale of MPUC (Midland Power Utility Corporation), Secondary Units (SU’s), and the Source Protection Plan (“SPP”) dealing with the settlement of a by-law appeal to the OMB.

We’d be remiss if we failed to mention Midland’s successful Butter Tart Festival. A big thanks goes out to EVERYONE who contributed to this special event helping to create and reinforce the enormous PRIDE we share. Please enjoy the aerial picture above of the Downtown core taken mid-morning the day of the event.

Representatives of the Town of Midland, MPUC, Newmarket-Tay Power and our consultants all gathered at the North Simcoe Sports and Recreation Centre the evening of June 1 to explain the details surrounding the sale of MPUC.  We won’t belabour the nearly four-year process that resulted in the sale, but rather focus on what the future looks like for Midland.  Here’s a summary of the key points.

Midland Council outlined the following priorities to achieve in the sale:  rate stability; maintaining current service levels; local presence in community; job protection and workplace safety; economic development support; and innovation.  While only time will tell if economic development and innovation will be achieved, Midland Council does appear to be able to check off its first four boxes.  The deal struck with Newmarket-Tay Hydro indicates that distribution rates will increase only at the rate of inflation for the first ten years, and then fall slightly as rates are harmonized with the existing Newmarket-Tay rate structure, all while maintaining current service levels.  Newmarket-Tay will continue to occupy the current MPUC facility on Highway 12 in a leaseback arrangement with the Town of Midland, and current staff will retain their jobs until such time as they retire or choose to leave.

So did Midland get a good deal?  Well, without providing any specifics, Council would have us believe it did.  They have told us that the net $22 million price tag “compares favourably” with the valuation performed by Henley International and that Newmarket-Tay’s offer was the best of all offers on many criteria.  The consultant, Mark Rodger, emphasized that it was the “best job protection we have seen to date on any LDC sale.”  The whole deal awaits approval from the Ontario Energy Board, but it may be concluded within 2017.

So, what will Midland now do with this $22 million windfall?  Administration’s tentative plan is to designate $1.5 million of the proceeds to a fund that will be drawn down over five years to “wean” them off the historical MPUC dividend, while achieving equivalent internal cost savings to offset the same amount, so there will be no net effect on taxes.  The remaining funds are to be split into two approximately equal amounts, with about $10 million designated to an “internal loan” reserve, which would be used instead of incurring external debt, and the remainder invested conservatively to provide annual returns, which can be used for Town projects and services.  The intention is to preserve the $20 million base capital from a spending spree by any future Council, by placing “handcuffs” on the money.  Council will entertain using long-term investments, and pass a by-law requiring public input and a 2/3-majority vote to access the principal. With that said, if a future Council has a notion to blow the $20 million legacy fund, it will be up to Midlanders of the day to step in front of it.

Our assessment is that Midland Council has taken a measured and responsible approach to the entire process, and is doing what it can to ensure Midland benefits from its equity in MPUC for many years to come.  For all the details presented on June first, visit www.poweringmidland.ca.

Secondary Units were discussed again at a Planning Act public meeting on June 7. As a result of the County rejecting the age restriction policy in Midland’s OPA #9, planning staff recommended deleting the 3-year minimum age requirement before a Secondary Unit (SU) could be developed and introducing specific size restrictions for SU’s instead.

Many speakers reiterated the history of the “Duplexes” on Aberdeen Blvd., which are clearly not SU’s, and wanted to prevent more Duplexes in the area except on land zoned accordingly. Tiffin Homeowners Association proposed that new builds (3 years and newer) should be limited to small sizes to achieve affordability while SU’s in older existing dwellings need not be further restricted since affordable second units are being created in them.

Local renovators and developers emphasized the demand for rental housing that was affordable in Midland and the recent market interest in Secondary Units, but at a more reasonable size than is being proposed by the Planning report. Affordability was a common theme amongst all speakers including the THA.

After listening to the public input, the Committee directed Planning staff to submit another, and hopefully final, report that recommends a reasonable accommodation size for Secondary Units and offers some flexibility, whether a geographic exemption for SU’s should be considered, and clearly defines the difference between a Secondary Unit and a Duplex.   During discussion of the item, Councillor Canning made a suggestion that seemed to find favour with several other councillors – limit SU’s in new builds to 35% of the entire dwelling but do not restrict unit sizes in existing dwellings.

The Province has mandated municipalities to create Secondary Units as one means of providing affordable housing under Bill 140. Council now needs to settle on an appropriate Zoning Bylaw amendment to regulate Secondary Units in Midland.

The second item of interest at Planning Committee was a settlement of a by-law appeal to the OMB.  The appeal was launched in 2014 after Council acted on a staff recommendation to pass a by-law that ostensibly implemented the requirements of the Source Protection Plan (“SPP”) for our area.

The appeal, filed by Mr. Stu Leggett and supported by midlandcommunity was based on the Director of Planning’s insistence that the bylaw would implement only the “minimum requirements” of the new SPP.  In fact, the new by-law far exceeded the mandate contained in the SPP and broadly prohibited land uses which could never constitute a “significant drinking water threat”.

While the SPP itself was based on thorough scientific study, Midland’s by-law was not. Midland’s failure to understand and implement the actual requirements of the new Source Protection Plan resulted in a very time consuming and expensive process for all involved.  Settlement of the OMB appeal will remove all the by-law’s excesses and also remove a probable appeal of Midland’s Official Plan Amendment. Only required polices will be incorporated in Midland’s new Official Plan when adopted.

Unfortunately, Midland’s excessive and misguided “improvements and enhancements” to provincial and national regulations has occurred all too frequently; examples include backflow prevention, septic inspections, and more recently SPP. Midland ratepayers who have borne the cost have never seen any benefit from going ‘above and beyond’ what is actually required.  In fact the opposite is true.

In closing, regulations in Midland which do not apply in the majority of other municipalities – both provincially and nationally – pose a significant impediment to development and economic growth. These unnecessary layers of bureaucracy add costs to Midland businesses, residents and ratepayers while placing a burden on the municipal treasury.

What’s Right With This Picture?

Be the first to comment on "June Council Report"