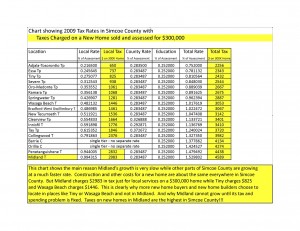 Just 8 days left before midlandcommunity.ca makes a formal presentation to Council on the need to control local taxes; we need your support on the 24th. Additionally, a very critical budget meeting will be held this Thursday, Oct 20th at 5:30pm, which you should also plan to attend. Currently the fluid 2012 budget calls for a 7.2% spending increase. The town still has an appetite to fund new activity, buy a new fire truck and add additional staff; these initiatives have to be STOPPED or deferred until our local economic picture improves and our taxes fall in line with competing communities. When you look at this chart,  you will note that Midland holds the distinction of being the highest taxed community in Simcoe County on a home valued at $300,000-.

1) High local taxes hurt the poor in our community most!

3) High local taxes effects your property values and your ability to sell!

We need you to mark your calendars now for 2 important dates Monday, October 24th at 7:00 p.m. (top priority) and Thursday, October 20th at 5:30 p.m., both meetings in the Council Chambers at Midland Town Hall.

Midland Council is in the process of establishing the Town’s budget for 2012.  When finalized, this budget determines the taxes we will all be paying for Town services in 2012.

As it stands now, Town staff has presented Council with a proposed Operating Budget that would see the Town’s spending increase by 5.2% next year. New staff requests by Department Heads, if approved, would add another 2% on top of the 5.2% proposed budget.

If we are going to avoid another year of high spending increases, we need to let Council know that is just not acceptable.  The most convincing way to deliver that message is by as many of us as possible showing up in person at the meetings when Council makes its spending decisions for next year.

October 24th is the evening we present a deputation to Council, titled “The Case for Controlling Midland Town Spending”.  The deputation will show Midland spends more to provide local services than most comparable Towns and Midland’s taxes are very high as a result.  You will likely see additional highlights of our presentation in the local newspapers soon.

PLEASE mark these dates and come out to support our effort to limit future property tax increases.  And if you want additional background and details before then, please read on:

In order to guide Town staff in preparing the 2012 budget, Council previously adopted the following targets:

2.                  ANY INCREASE IN STAFFING LEVELS BE EXCLUDED FROM FIRST DRAFT ESTIMATES AND ADDRESSED UNDER SEPARATE COVER.

The first draft of the capital budget was presented on September 15th. While no comparison to the target was provided that night, it appeared capital spending in 2012 would be close to target.  The interesting debate surrounds a request from the Fire Chief to borrow more than $800,000 to purchase a new aerial truck which would add approximately $67,000 to the budget each year for the next 20 years. We think this request should be denied because the truck would replace one we already own that is quite functional and fully paid for.  Furthermore, Fire Department spending per household already increased 97% from 2000 to 2009 – the highest per household spending among the 14 municipalities we studied.

The first look at the operating budget was presented to Council on September 29th.  George Dixon and Stewart Strathearn attended on our behalf and report there remains much work required on this front. The first draft shows an increase of $888,727, a 5.2% increase over the 2011 approved budget.  The elephant in the room is payroll costs that are escalating at an alarming rate.  Payroll costs alone account for approximately $578,000 of the total requested $888,727 increase.

As far as the requests for additional staff are concerned, it is clear to us that they should be denied and that Fire and Police will have to look at new approaches/models going forward to contain their escalating costs. These two departments collectively represent $36 of every $100 we pay in taxes to the Town.

At the conclusion of the September 29th meeting, a majority of Councilors seemed prepared to “explore” workforce management alternatives, likely through attrition, as a means of easing budget pressures.  However three members of the seven present that night also had little apparent difficulty supporting the draft budget as submitted.

Unlike some Councilors, we believe it is quite possible to reduce costs without reducing services. We think a 0% increase in the taxes Midland charges next year is a reasonable and achievable target. Without any tax increase, Council will still have more money to spend next year due to additional revenue that comes from new assessment.  In 2011 for example, revenue from new assessment would have allowed Midland to spend $560,000 (3.9%) more without anytax increase.  We recognize a strong case can be made to decrease spending immediately to put our house in order sooner.  But if we can stop the bleeding and hold taxes flat for a number of years, in time “reasonable and responsible” might be words once again used to describe property taxes in Midland.

Please show your support for those on Council who are looking critically at the budget with a view to stopping the insanity of runaway tax increases.  These are tough decisions they will be making on our behalf and we need to let them know we are behind them.  Write your Councilor, Mayor and Deputy Mayor and show up at the budget meetings.   Finally, don’t forget to show up at our deputation on the 24th at Council’s meeting at the Town Hall starting at 7 p.m.

Please confirm your attendance for the October 24th deputation (7 p.m.) by replying to Joan Strathearn at talktous@midlandcommunity.ca and if possible, please also try to make the budget meeting on October 20th (5:30 p.m.).

Thanks for what you’re about to do!

Our group, Coalition for Fair Taxes, read with great interest and optimism the amendment to the Growth Plan for the Greater Golden Horseshoe, which contemplates the proposed urban node designation for Midland- Penetanguishene. We’re big believers of the two towns working together and exploring greater alignment and synergies.

We note, in addition to the three scheduled public hearings, both towns by way of media announcements have requested copies of submissions be sent to their CAO’s, Walker and Rath respectively; please accept this letter as a written submission on this matter.

It is clear from previous positioning and our recent readings, that the towns of Midland and Penetanguishene were cohesive in their approach to secure ‘urban node status’.  I quote from the amendment, “Urban nodes are the settlement areas of the city of Barrie, ……, the Town of Midland TOGETHER with the Town of Penetanguishene”. This language certainly motivates both communities to explore those things in common with an appreciation of our uniqueness as it relates to language and heritage.

When it comes to infrastructure and sharing costs to provide ongoing services, we believe a commitment/agreement needs to be in place between the two towns and should be a pre-cursor for moving forward. The timing could not be better considering we have two newly elected Mayors and common taxation and financial challenges.

Services like Fire, Police, Hospitals, Libraries, Public Works and Water and Wastewater management, etc, could and should have more synergies. There is also a need for a shared vision around transit infrastructure, which is foundational to the partnership, in order for residents to share in the benefit of services and cultural icons.

You may recall around election time, our group conducted a survey in the local newspapers inviting Midland residents to respond to five questions. One of the questions was, “I’m a proponent of shared service arrangements with neighbouring communities (Fire, Police, Medical, Waste, etc)? 100% of the respondents replied YES to the question. While we realize this exercise was directed toward Midland only, we’re confident that if the citizens of both towns understand the benefits up front, they will certainly be supportive of this initiative.

In summary, our group will support the plan if the concept of shared resources/services providing greater efficiencies and a corresponding reduction in budgets is embraced upfront by both towns; and we certainly cannot support the plan, if both towns fail to get serious about run-a-way taxes.

Fundamental to attracting new business and new residents is a tax friendly and policy friendly local government(s). Both towns need to aspire to a passing grade on these two fronts. Both towns have taxes in excess of where they should be and this will clearly act as a deterrent for growth and prosperity.

Thank you for this opportunity to provide public input.

Allan Shakes on behalf of the Coalition for Fair taxes