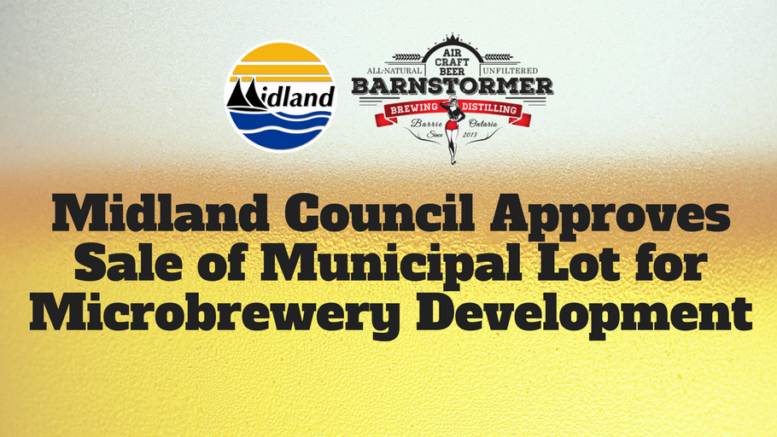 A light agenda morphed into a marathon Council meeting, but before we explore the reason, lets quickly cover off the less contentious issues of the evening.

First came the announcement from an earlier closed meeting that Robert Gow has been appointed to the Huronia Airport Commission.

Mayor McKay then presented the Heritage Merit Award to Mr. Ron Hunt of 310 5th Street, owner of a circa-1905 home built in Edwardian style and maintained by Mr. Hunt in classic condition.  That was followed by the Heritage Appreciation Award presented to Frank & Mary Graham for their tireless work to ensure we never forget the sacrifices made by our military service personnel.

Lois Lipton, President and Chair of the Georgian Bay General Hospital Foundation delivered the only deputation to thank the Town of Midland for over $437,000 donated to various capital programs since the year 2000.  These contributions, combined with other private and corporate donations, are the only funds our hospital receives for capital projects.  Lois ended her presentation with a plug for the next “Breakfast of Champions” dates on March 17 and April 21.  Contact GBGH Foundation to sign up for this behind-the-scenes tour of some areas of the hospital not generally seen by the public.

Finally, the agenda turned to the most hotly anticipated issue of the evening, the proposed sale of Municipal Parking Lot #7 at 526 Bay Street.  Many residents and businesses were surprised to first hear vague references to this sale just weeks ago, only to discover that the deal was all but done.  Tonight was the prescribed opportunity for the public to speak on the issue.  Three downtown businessmen and a resident spoke passionately against the move, while one businessman saw both pros and cons in the proposed development.

Key issues expressed by this group about the development in general included (in no particular order):

– loss of customer parking for nearby businesses;
– the perceived secrecy and circumvention of due process;
– the fact that the business would include an industrial activity in a Downtown Commercial zone;
– the local business community feels shut out of the opportunity; and
– a perception that the property has been sold below market value.

Council and staff responded to each of the issues raised.  Mayor Gord McKay emphasised that he welcomes inquiries from any local business people wanting to explore opportunities, just as he did with Barnstormer Brewery (the proposed purchaser).  Councillors File and Strathearn pointed out that the Downtown Master Plan shows the lot as mixed use commercial/residential (which also permits some industrial uses), implying that this should have been a clue that it was potentially available for development.  Councillors Canning and Strathearn added that confidentiality was absolutely necessary because the concept proposed by Barnstormer could easily be stolen by others if revealed by Council, and to betray that confidence would lead to distrust of Midland Council by any future developers or entrepreneurs.  Finally, CAO John Skorobohacz and Director of Planning and Development Wes Crown outlined the procedural and bylaw provisions that allowed all of this to take place perfectly legally and cited a Royal LePage opinion in setting the selling price at $360,000.

The owner of Barnstormer Brewery was also present to respond to many of the issues directed specifically at his business (wages to be paid, hiring of local staff, disposal of brewing ingredients, etc.).

In the end, council was unanimous in their support to move forward with the development, which is to include a restaurant/brewpub, co-operative workspace, and potential residential units on the third floor.

After this agenda item and in stark contrast, the proposed sale of 344 Gloucester St. and 787 Vinden St., along with a bylaw to revise the NSSRC fee schedule passed unanimously without discussion, dissent, or any comments from the public.  Those items were followed by short discussions regarding Internet/telephone voting in the next municipal election (which got a resounding thumbs down) and the appointment of temporary bylaw enforcement officers to be deployed when permanent staff are absent.

We certainly look forward to the arrival of Barnstormer Brewery near Midland’s waterfront, but the process could have been managed far better.  Despite its protestations, Council could have been far more transparent without betraying any confidential information.  When Barnstormer first indicated an interest, Council could have passed a motion to declare the land surplus and held an open call for proposals that met their key economic development criteria, without revealing the details of any given proposal.  We hope that Council as well as local business people can heal the wounds and have learned some lessons here.  For one thing, we encourage local investors to take an open-minded and creative look at the Downtown Master Plan, the emerging Official Plan, and other municipal documents to find similar nuggets of opportunity lurking in under-utilised facilities or potential future surplus property (including real estate or other capital).

What’s Right With This Picture?

Midland – Best Place in Canada for Community Engagement and Pride